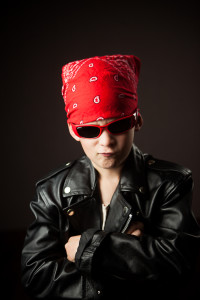 Example: Beef swaggered into the bar. [already we have some idea about his character, do we not?]. Sweat discolored his red bandana, which had faded creases near the seams. His long pony-trail trailed behind, black mingling with streaks of gray. His sleeveless shirt hung loose over his bulbous belly, revealing a skull for a tattoo on his shoulder and a deep scar on the underside of his flabby arms. Smoke lingered in the dark room, but still, Beef wore his shades. Even through his lengthy beard, his frown was still visible.

So what sort of impression do you get of Beef? What do these details tell you about his character? Let’s start at the beginning. The dude swaggers into a bar. Okay, so he’s probably pretty confident. He wears a bandana and has a pony tail and his name is Beef–so maybe he’s a biker dude. But his bandana is discolored with sweat and faded at the seams. Okay…so maybe he’s had it a long time. Or maybe he hasn’t but just doesn’t take care of his stuff. Maybe we could add that he always smells like body odor–now the picture becomes clearer. He’s a man that doesn’t care much for personal hygiene. He’s got a skull for a tattoo, so he’s probably pretty tough (or at least tries to convey he’s tough). He wears shades when he clearly doesn’t need them. So he’s a man more concerned with giving an impression than practicality. Yet he keeps that faded bandana. Interesting–simultaneously caring about the impression he gives off, but also unconcerned with hygiene.

Notice we’re not giving a police sketch of the man (e.g., He’s about 5’9”, 250 lbs with a beard and a ponytail….BORING!). We’re only giving details that give insight into his character. Also notice that we’re not flat-out telling people what he is (Biker Dude)–we’re showing it and letting people form their own impression.

Now let’s break from the stereotype a bit, eh? Let’s keep going with the story: (And I’m totally pantsing this, by the way)

With trembling hands, he reaches for his breast pocket, past his pack of cigarettes and grabs a photograph–a child, no more than three years old, sitting on a plastic tricycle, sporting a black sleeveless shirt, wearing sunglasses and the Spiderman helmut Beef had given him. The child in the image frowns, a mirror image of Beef’s own image. The boy forms two fingers into the universal sign for peace. Beef looked up from the picture and glared at the man in the bar–the boy’s father.

Okay…so what do we have now? Despite the rough and tough exterior, he’s got a soft spot for this kid. Where do you expect the scene to go now? It seems there will be some confrontation (he is glaring at the boy’s father, after all). But notice how the details have kept us guessing–yeah this man is probably capable of doing some damage, but he’s also got a soft spot for what is presumably his grandson.

I remember when I first started novel-writing, I filled out a character sheet for my main players. I couldn’t figure out why in the world I’d need to know what sort of clothes my MC is dressed in, or what their room looks like, or what their most prized possession is. Now I know–these tidbits of information reveal information about your character.

So…how are details revealing information about your characters? 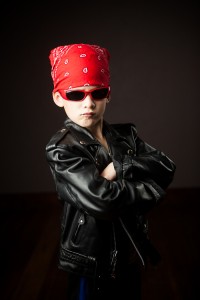 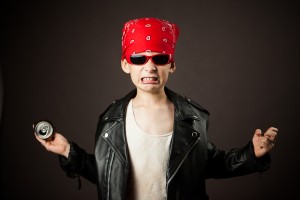 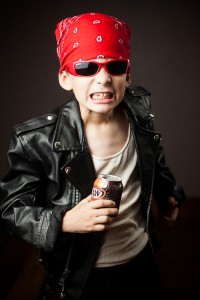 One thought on “Characterization: It’s all about the Deets”