Perhaps the greatest tragedy in life is that we pass people on the streets, at work, at church, or at the grocery store and never get a chance to meet them. I wonder if, one day when we meet our Maker, our greatest regret will be that we never reached out to more people and learned their story.

I almost missed this one–the story of Dale Swaim’s near death experience.

I was sitting in church, struggling to stay awake. My rear hurt from sitting on the pews for so long and I reached for my phone to check my email. Again.

Someone was making announcements. I wasn’t paying attention, until I heard, “…hickory wood…”

My ears perked. I was a smoker. Not the tobacco sort, or the wacky tobacky sort, but the type that left meat in a murky haze for hours so that applewood or hickory flavor could saturate my meat.

That kind of smoker.

Apparently, the announcement that I had missed, was that someone was moving and had logs upon logs of hickory for the taking. I raised my hand, but someone beat me to it. 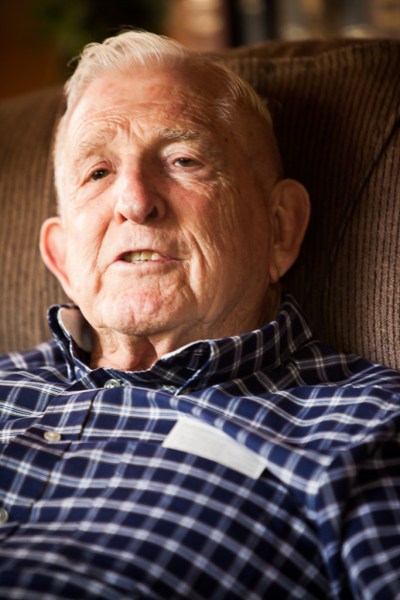 I knew the guy, but not well. He was that eighty-something fellow that always waved to the munchkins and teased the Sunday School teacher.

And that’s how I came to learn his story.

“Looks like we’ve got work to do,” he said, patting my shoulder. “I’ll rent the log splitter, you supply the truck. Sound good?” 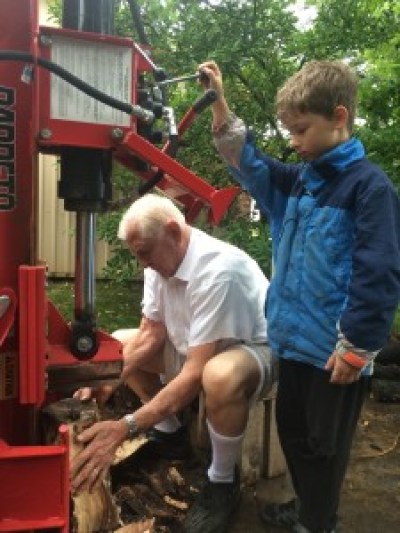 I brought my oldest along and for about 13 hours over the course of two days, we split, we stacked, we chopped, and we hauled. All the while, Dale sang. “Watch out for that bug. He might hit you like a mug. What a big ol’ thug.”

Dale winked. “Neither have I.”

It should have been grueling. One day it rained, and for the other the sun beat down upon us, 80 plus degrees. I was dumb enough to touch the radiator and get second degree burns that pestered me the entire time. Splinters found their way up hands, past our arms, and into our underpants.

Yet we had the time of our lives. 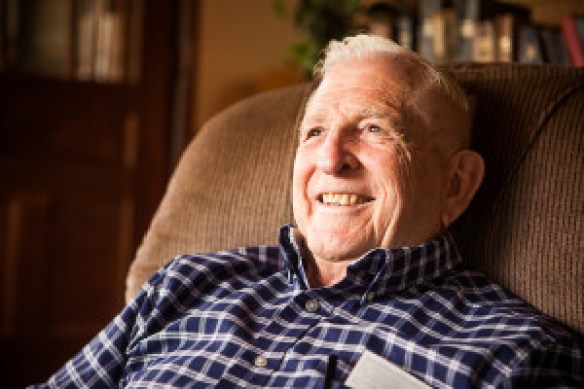 “Boy I’m glad we did this,” Dale said. “Up until now, you’ve just been that guy who sits up in the front, playing with his kids. And now I know you. And I tell you what. I really like you.”

Dale looked over at Corban and grinned. “But I like him better.”

“That kid’s done more work than the both of us.”

“I gotta sit for a minute,” Dale said as he powered off the log splitter. “I don’t have the back of you young guys.”

I hid a chuckle. If it weren’t for this 82-year-old man beside me, I would’ve stopped for a break a looooong time ago.

So I joined him, sitting on patio chairs that were as old as him. And I got to hear his story. 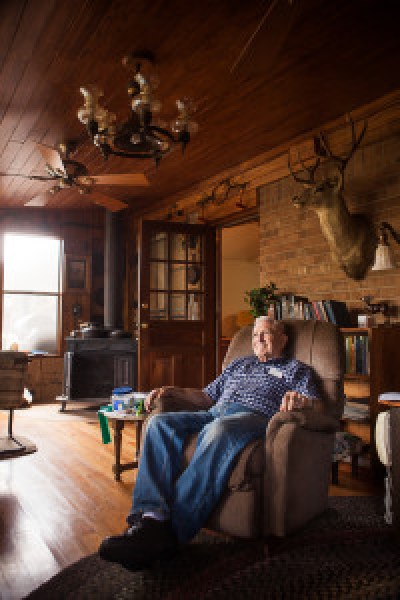 Five years ago, he went into the hospital for a routine operation. It was an outpatient surgery. It was supposed to be simple. The nurses said he could go home at 10 that morning. He might have wondered what he’d fix his wife Fern for lunch or how deep he’d have to dig a ditch to fit the drainage pipe.

But no. He wouldn’t make it home that night.

Something changed in the noise. Pain shot through his chest–consuming. His breath seemed to stop. The pain grew stronger, spreading like a renegade infection.

All sounds faded. Before he lost consciousness, he saw two silver paddles from the doctors approach his chest. 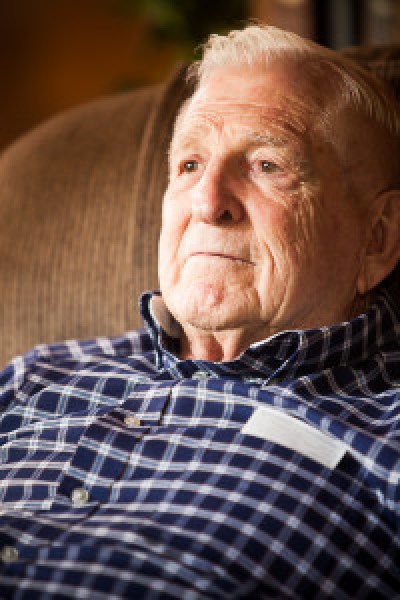 But the pain was gone too. He opened his eyes. Everything was white–pure white, but not blinding. A calmness crept into his chest. Contentment. Peace circulated through his veins.

Dale was dead and he knew it.

But what about Fern? His wife of 57 years–what would happen to her? Over the last few years, she had become less mobile, less able to walk, to move, to cook.

But that peace he felt…

“It’s okay to die,” a man said, speaking from behind his left shoulder. His voice was gentle and beckoning. “Fern will be taken care of.”

They moved, floating in the white void.

But what about Fern?

Dale couldn’t shake that thought. For better or worse. Til death do us part? No. Dale didn’t believe that. He’d have her forever. No matter how difficult life had been, all he needed was to have her in the room with him. He could feel her when she walked into a room. With her there, he could be happy.

“It’s okay,” the escort said, stern this time. “You can go ahead and die now.”

They continued moving into the white void and approached a white wall.

But what about Fern? 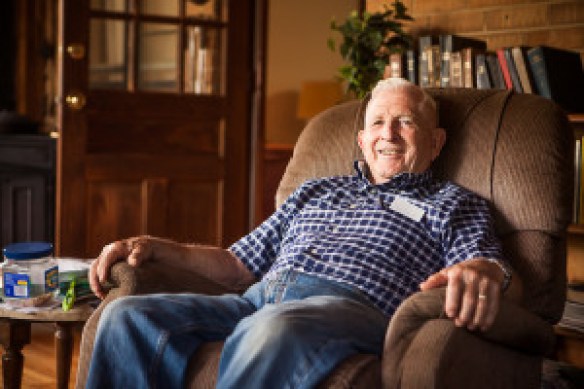 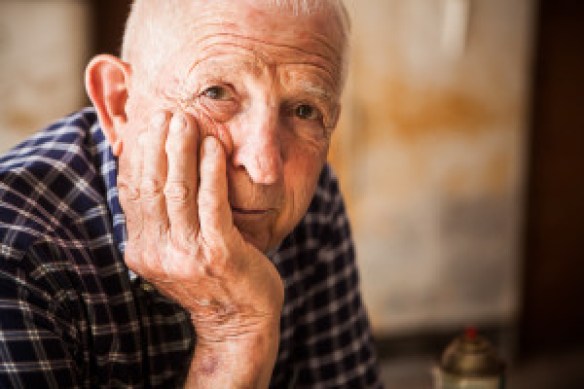 He awoke back in the hospital. The monitors beeped as steady as his heart. That consuming peace was gone.

But Fern was there.

That same contentment he felt in her presence returned.

He’d lost his chance to die, for now. Lost that better-than-morphine high, had his very own near death experience. But he was with Fern.

“I suppose it was because I couldn’t decide,” Dale said. “It was so peaceful, but I didn’t want to leave Fern.”

He nodded. “I decided to stay with Fern.” 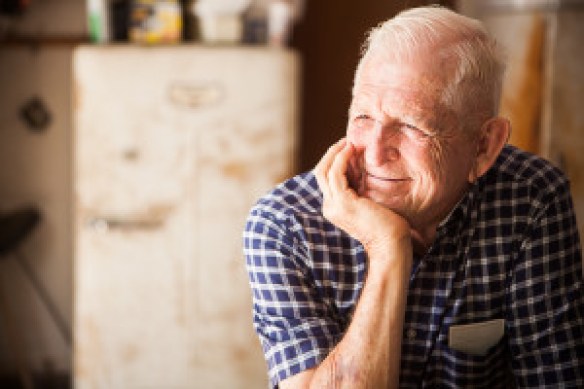 “Sometimes I wonder,” Dale said, “…whether that escort still watches me, sees all the bad things I do.”

Fern and I laughed.

“She’s part of me,” he said. “Is that a good way to put it?” He shakes his head, frustrated he can’t find the words. “You truly do become one.”

As I watch him look at her, I can see it. His eyes seem to sparkle and his smile deepens. His shoulders seem to relax. 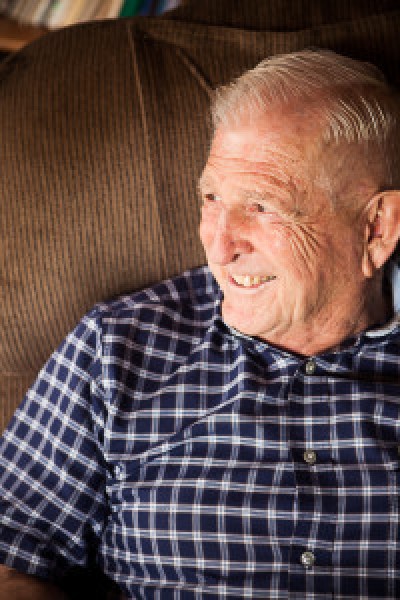 That’s a man who loves his wife.

Do you have a story to share? Do you know someone with an interesting story? Visit my story submission page and tell me about it.

10 thoughts on “From heaven to heaven: A near death experience”