In my last post about writing with dyslexia, I mentioned my brother (Jordan) recommended I fill my journal with stories. Jordan was a master at this. I thought it’d be fun to share one of the stories he shared with me in one of his letters (complete with Jordan’s own illustrations). So, without further delay, Jordan…

So there I was singing “Video Killed the Radio Star” in the shower when all of a sudden the water stopped, and the pipes made a weird “She’s gonna Blow!” type sound.

To explain the Chilean shower system to you, the thing that heats the water is called a Calefon. It’s a big hot box with flames inside to heat the water.

My brother Jordan’s illustration of a Chilean shower. (Gotta love the sensor box).

The water passing through the pipes is heated then carried to the naked recipient.

So the water stopped. I examined the calefon which still had flames which meant it was over-cooking the passing water.

It all came out in an explosion of flying boiling water. Allow me to illustrate -> 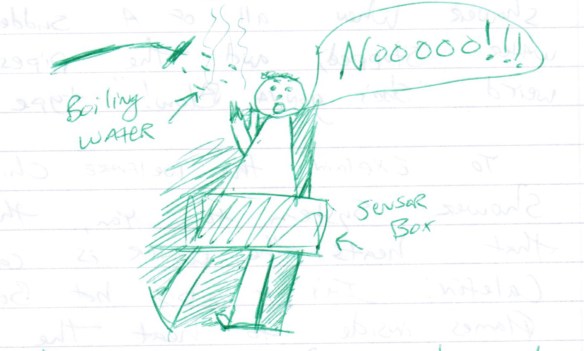 Yeah. So have you ever been burned in the shower? I have. I had blisters on my chest, but I’m 98% healed now. Weird stuff happens in the mission.

And let me share one more, from the same letter. (No illustrations this time. Sorry).

Just the other night we were walking at night and all electricity went out in Lago Ranco. We couldn’t see anything!…We walked very slowly. Holding each other’s backpacks…once in a while a car with headlights passed by so whenever we had 2 moments of light, we ran. It’s kinda like life. We have dark sad moments, but when the inspiration of God comes to temporarily light the way, we should go with it. Run Dusty, Run!

I’ll always be grateful he taught me to see a world rich with stories–some funny, some inspiring, and anything in between.

12 thoughts on “Uncovering stories from the mundane”