When you walk in darkness, you will be deceived.

Amber and I had just become engaged. It was December in Fairport, NY and we wanted to escape from everything “normal” and bask in our newly established change-o-label. So we donned our winter coats and walked around her neighborhood. It was around 8PM and quite dark. The only light was the occasional street lamp.

I don’t remember what we talked about, but it was awesome. We stuffed our interlaced fingers inside the pocket of my winter coat and she pressed her torso against my arm to keep warm.

And then it happened.

Something moved. I squinted in the darkness and saw him. Halfway up one of her neighbor’s yards, I saw a little white dog. I felt bad for the thing. He shivered in the cold air and trembled with every gust of wind. From the looks of it, he was a teeny tiny shih tzu.

I crouched to the ground and with the most soft, tender voice, I called to him. “Come here boy. Come here.”

But she didn’t have to explain. A large gust of wind blew and the tiny shih tzu was carried off into the darkness.

That little shih tzu wasn’t a dog after all. It was a Walmart grocery bag.

Now you get it?

You see the metaphor, right? When you walk in darkness, you’re bound to be deceived.

Don’t trust what you read on Facebook. (Or anywhere else).

This happens all the time–some bit of hoaxy fluff goes viral and people don’t take the time to stop and investigate.

Facebook’s new privacy settings allow them to sell your organs to an invading alien army!

Cancer cured by a soccer mom from New Jersey

Seal Team Six, bin Laden’s team of assassins, hunted and killed by the US government.

Most false assertions I read about require two minutes of research! That’s it! That’s all that’s needed to find out what is bunk.

The problem is that soooooo many people read the headline (or maybe even read the article) and do nothing else.

And guess what happens? 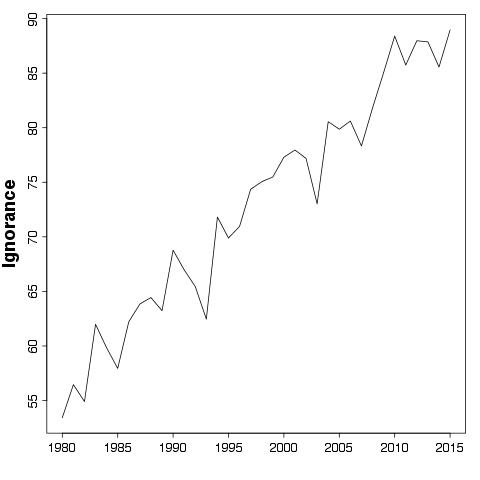 (Totally fictitious graph, by the way).

Alas–the internet has not made us any more informed. It has only made it easier to spread misinformation.

Do we spend our time in darkness? Do we only casually read charged article headlines and assume the content is anything but misleading? If so, we will be deceived.

So how do we avoid it?

That’s a good question. I used to have a psychology professor who said he was training us to be “humble, empirical skeptics from Missouri.”

I think that’s the answer. If you hear a claim, be skeptical, but also humble. Is it possible that a soccer mom discovered the cure to cancer when thousands upon thousands of exceptionally intelligent researchers have spent their careers with no success? Probably not. (That’s the skeptical part). But is it possible? Of course. (There’s the humble part). Now let’s investigate. (That’s the empirical part).

(And, by the way, cancer is an umbrella term for a bunch of unrelated diseases that share some characteristics. So, it’s very likely that there’s no magic bullet for cancer. That alone ought to make us skeptical of claims that cancer has been cured. But, don’t trust me! Do some research yourself!).

Let us lead the way

Let us not be deceived into thinking a shih tzu is a grocery bag or that Elvis is living in Jamaica with Tupac Shakur. Take the time to research and let us use this wonderful tool (the Internet) to inform rather than spread deceptive (and sometimes dangerous) messages.