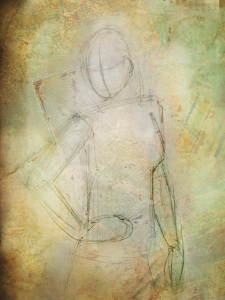 I can’t believe I’m writing a blog post about querying. Seriously? There are 7.8 ba-tillion posts out there that boast of being the “definitive guide to querying agents.” Why in Potter’s scar would I add to the refuse of rhetoric???

Because (and I seriously don’t understand why my elementary school teachers taught me never to start a sentence with “because”….), despite reading sooooo many blog posts and consuming soooooo many books and having my own queries critiqued soooo many times…

Now, it’s entirely possible that all those emptamafillion articles were saying exactly what needed to be said and I just didn’t get it. (That wouldn’t be unheard of…don’t let the Ph.D. fool ya….I’m pretty dense). But I’m going to offer not just an explanation, but also a method for doing it–one that builds the query letter in stages. One that begins with a template!!! Seriously. Like, fer realz. You can’t get simpler than that–a query letter template for literary agents!

The Bones (A Query Letter Template)

I make a promise to you. By the end of today, you will NOT have a query ready. Ha! How’s that for honesty? Even if you plow through all these lessons, you aint there…na uh. There’s still critique groups and revisions and more critiques. BUT, we’ll get ya started. All you have to do is fill out the query letter template below!

(Insert character name) is a (insert character trait) who (tell us about how “normal life.”) Yet when (give inciting incident) happens, (state something that is thrown out of balance).

Now, (state character name) is forced to (state what the central goal of the story is). As (s)he attempts to (name things the character does to accomplish said goal), (state what obstacles are encountered).

Let’s do an example with a story with which we’re all familiar. How about Billy Goats Gruff? We’ll have to embellish some of the details, but this outta be fun!

Tommy the goat is the youngest of two older brothers who all enjoy feasting on grass in the meadow. Yet when Bibbledy-Basty McFladigan, the neighborhood troll sets their meadow on fire, Tommy and his two brothers’ very existence is threatened.

Now, Tommy and his brothers embark on a journey across the bridge that will lead them to another pasture. As they attempt to cross, Bibbledy-Basty threatens to eat them. Forced to choose between certain death by starvation and probable death by troll, Tommy must decide whether to face his fears or starve.

It’s certainly not my best writing, nor will it be your best. That’s okay. At this point, it should suck! You have the bones of a query letter–a corpse, if you will. An ugly corpse (then again, what corpse isn’t?). But this corpse will travel backwards in time toward vitality, Benjamin Button style.

After writing the query, I want you to do one more thing–read it to your friends, family members, enemies, and sentient plants (or anybody who hasn’t read the book) and ask them one question, “Is the choice (s)he’s forced to make a difficult one?”

I say this because so many queries I’ve read look like this, “Amy’s father is a jerk. When she meets Al, she’s in love. Yet Father hates Al. Now she must choose between love and family loyalty.” Ummmm….duh? Her father’s a jerk. Why wouldn’t she choose Al? So, if the choice isn’t difficult, the stakes aren’t high enough (in other words, the cost associated with one choice over the other are not large enough).

Tune in next time, when we add some flesh to these bones.

4 thoughts on “Query writing: A Template for Query Letters”