Opine: To express an opinion. 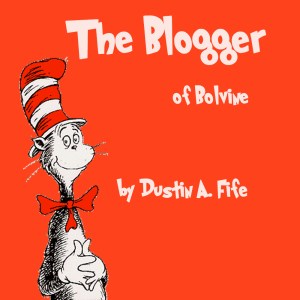 There once was a blogger from the land of Bolvine

Who made a promise to never opine.

The stories he shared of morals and life

Were carefully crafted to minimize strife

Atop his perch, and feeling quite smug

Who blasted their dogma, both far and wide,

With craft and wit, they wrote with great pride

Though he often agreed, this man of Bolvine

he remained in silence, refusing to opine.

Then came a man who sought to lead,

He had a past entrenched in greed.

With angry words, and hair so strange

He shouted with zeal, promising change.

Too good to be true many didn’t believe—

the promises he swore that he would achieve.

Took to the rings, along with journalist diggers.

What they uncovered of the leader’s dark past,

(“This is wrong, this is evil,” he said in silence.

Uneasy and uncertain, he blogged with resign,

But the man’s supporters grew stronger and stronger.

Until the rallies held no longer ,

The voice of those who boldly objected

He silenced the men who stood and protested.

Against the ruthless tyrant of Bolvine.

But soon his words fell on deaf ears,

Until the day he was “disappeared.”

Yes, the thug was young, but had a condition,

As verified by the wealthy mortician,

A crony who gained the leader’s trust,

And turned a blind eye to the poisonous dust.

Soon the blogger was alone in his silent objections,

And so he blogged, and feigned his affections

for the man who silenced those who opposed.

Or at least, that is what he supposed.

For from east to west, in the land of Bolvine,

thousands upon thousands refused to opine.

Refusing to object to the man-gone-tyrant.

If only they knew a resistance lay dormant

who feared their neighbors were secret informants.

Yet if only they, the people of Bovine,

Would quiet their fears, and begin to opine.

Of a man who thought his blog would fail.

If he only said what was on his mind,

of the tyrant who campaigned in the land of Bolvine.

Remember this, wise readers of mine.

When you are tempted to not opine,

You are right, you may not change a mind,

But at least, you might stay the beast in your land of Bolvine.