See that counter (countdown to launch)?

You know what it means?

That means we’re just over six months away from the launching of my first novel, The Nexus has Fallen.

And where do we stand? Currently, a final team of superstar beta readers are piloting my novel. (Thank you!!!!!)

This is it, people.

The time is coming.

The Story of my Novel

I never thought I’d be a writer. Ever. Ever, ever, ever! Plagued with dyslexia, I struggled to read, let alone write.

Then I was watching a documentary on Ronald Reagan. In it I learned that his approach to resolving the nuclear threat from the Soviets was to build our own arsenal of nuclear weapons. In Reagan’s view, we needed to negotiate from a position of strength.

The next day, I was taking a shower. (That’s where I do my best thinking/singing). I had just lathered my Barbasol shaving cream on my face and began considering Reagan’s approach. I asked myself what my approach would be.

How would I address a nuclear threat?

That should do it, right?

I rinsed the shaving cream from my face and lathered my bath sponge.

Here’s the problem–the technology to make new bombs is still there.

So my next thought was, well, then all you have to do is somehow “delete” the technology.

Nope. First off, you can’t delete nuclear technology without affecting so many other technologies. And second off, you’ll still have a boat-load of scientists who remember the technology, even if you somehow managed to delete it.

I just finished washing my feet when I got an idea. We could release a virus that incapacitates human intellect. You don’t have to worry about “deleting” the technology because humanity would be too stupid to understand it anyway.

But of course, that’s an evil solution. But it’s one that may just seem humane when you consider the alternative…. nuclear winter.

I dropped my bath sponge and froze in place.

That sounded like a cool premise–evil organization releases an intellect-crippling virus. But of course, somebody had to have protested, right? Somebody had to try to find a way to stop them, right?

There had to be a rebellion.

But I found nothing.

Well, I thought, if that book hasn’t been written yet, I guess I’ll have to write it.

And so it began.

Problem was, I had no idea how to write a book.

It has taken four years. It has taken over 15 beta readers. It has taken over a dozen major revisions. It has taken two paid editors. But my “payments” came more than monetarily. I have “paid” countless failures, countless heartbreaks when I realized the message I was trying to give wasn’t understood, I have “paid” 50 rejections from literary agents who said nothing more than it “wasn’t for me,” and I have paid thousands upon thousands of hours, typing away at my computer, wondering whether this time, I’d finally get it–that the vision I saw, the emotions I felt, the words I typed would finally burrow into the hearts of my audience.

And it is here.

The Nexus Has Fallen:

Cole’s village—destroyed. The intellectually stunted villagers he loved—dead. And it won’t end there. The Malkum, a rogue think-tank, hunt humans whose intelligence has re-evolved since the Malkum instigated the Genetic Apocalypse. In a desperate attempt to prevent genocide, he searches for a legendary rebellion.

When he finds the rebellion, their army stands behind a corrupt general, one Cole must topple. And the rebellion has lost control of the only weapon they have —the Nexus, a mind-altering tool that hides memories and alters loyalties. Now the Malkum know where to find the rebels. And they’ve also discovered the rebellion has stolen the only copy of the world’s data, the Archive.

Now, I need your help. And, quite frankly, I need a lot of help from you, fair readers. I want my words to travel to the hearts of millions, if not billions of people. I want the “lessons learned” from the characters in my book to be learned “in vitro” by everyone–lessons of love in the face of hate, forgiveness in the face of betrayal, and unwavering tenacity in the face of impossible obstacles.

My book inspires me to be better.

I want it to inspire the world.

So, in the next six months, I’m going to need your help in preparing for the launch of The Nexus has Fallen.

You can begin by offering your input on the cover design.

If so, please follow the link to my 99designs book cover contest: 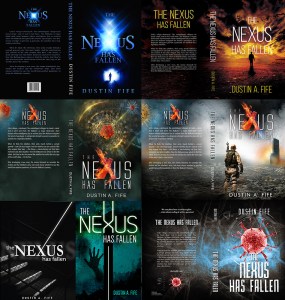 And finally, I want you to know how much I appreciate you all. I began this blog not much more than a year ago. I began with little more reason than to build an audience of people who appreciate my story-telling.

But it’s become so much more. Many of you have emailed, or called, or chatted in the hallway at church or at work to tell me what a particular message has meant to you–that your lives have been changed for the better. And it means a lot to me to hear you say it.

And, not to mention, this blogging thing has changed my own life. My best insights on life and love and fatherhood and forgiveness have come because of you.

Thank you for keeping me diligent.

Thank you for bringing out the best of me.

I’ll see you at the end of the Nexus.

4 thoughts on “Cover reveal? I need your help!”