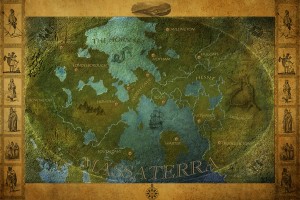 Here’s a formula I’m a big fan of (from Write Great Fiction: Character, Emotion, and Viewpoint):

I’ll focus on the first three (I’ll actually skip the “personality/character traits” to make things brief). A character yearns for something because of something that happened in the past. Harry Potter wants to defeat Valdemort because the dude killed his parents. Katniss wants to live because her family has already suffered the death of her father. Vin wants to defeat the Lord Ruler because her oppressed her people.

In one of my novels, The Great Ruv (of scribophile fame) said my antagonist wasn’t sufficiently motivated. My antagonist belonged to an evil organization and wanted to extinguish a rebellion because he hates war. Here’s how our conversation went:

Ruv: “Why does he want to avoid war?”

Ruv: “Not good enough. Why does he want to avoid war?”

Me: “Because war kills people.”

Ruv: “So? Why does your antagonist personally despise war?”

Me: “Because he is one of the few alive who actually has seen war.”

Ruv: “Better. But what has he seen that makes him despise it?”

Me: “The death of friends and family, I suppose.”

It was enlightening. Ruv was absolutely correct–my antagonist wasn’t any different than the millions of others who had lost someone close to them. So here’s what I did (remember this is a war in the future): said antagonist was recruited to work for a think-tank just before the war broke out. His twin brother, on the other hand, was not so lucky. The twin was drafted. As war broke out, my antagonist made a brilliant discovery in genetics. This discovery caught like wildfire, but with disastrous consequences–his research was used to develop biological weapons. One nation used these weapons to kill the antagonist’s twin brother.

Now it’s personal. Akram, more than most, hates war because it killed his twin and it defiled his most important discovery and it used his gift to the world against him.

So…how can you make your characters’ motivations more personal? So Jim wants to stop a terrorist attack. Why? Because people will die. (Not good enough). Because his child goes to daycare at the building where the attack will take place. (Better). Because his child goes to daycare there, and the child just survived a heart transplant. (Even better, but more!) Because Jim’s only child that survived a heart transplant goes to daycare there, and the antagonist is a former combat buddy-gone rogue. (Almost there). Jim’s transplant surviving child will die unless Jim can stop his former combat buddy, using clues about their shared history as intelligence analysts of a branch that no longer exists. (Now we’re talking!)

To create believable, motivated characters, we must alter their backstory such that no other person in the world is as motivated to fill the role they fill.