There was a time when I never wanted a family. No kids, no wife. Just me and blissful solitude.

That was last week. Okay, so maybe it wasn’t that bad. It’s not that I didn’t want my family. I was just on edge. All the time. My blood pressure never seemed to settle. I was either buried with work or walking through a hailstorm of noise when I came home.

Never a moment of quiet. It was, in many ways, familiar. But it had never been this worse.

Or should I say, it has never been this worse.

The only thing that seems to calm the tempest of emotion is the outdoors–chopping wood in the backyard, hiking for hours near Lake T-Bird, going on bike rides in the wintry air.

But a few days ago, it wasn’t an option. Amber, it seemed, was just as stressed as I was. So, I figured maybe I could combine the thing that calms me (the outdoors) with the three things that stress me (my boys).

Alas, alas, alas. I spent almost the entire time “putting out fires.” (As my mother was wont to say).

No you can’t swing that stick at him.

I ended my lil’ adventure no more relaxed than when I began.

So were began driving around in the pickup doing nothing but wasting time. And then we see the oddest thing… 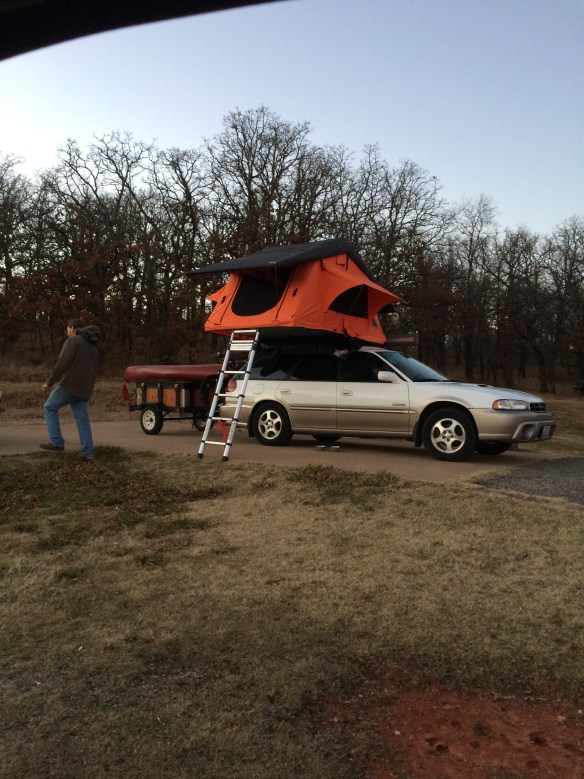 So I pulled over, heavy with curiosity.

The dude kinda blinked, all surprised and stuff. “What do you mean?”

“Cuz that’s how it was built.”

He then went on to explain how the thing folds up onto the rack of the roof of the car. It takes naught but five seconds to get’r set up.

“Because that’s my life. Driving from place to place.”

The man was a genuine, bona fide nomad. Born and raised in Seattle, the man has spent the better part of his adult life living out of his car and its companion tent.

With an envious glance at his kayak, my soul dropped. I want that life, I thought.

I then spoke the thought out loud. “I envy you.”

He chuckled to himself. “No brother, I envy you.” His smile faded. “You’ve got a family. I’d give anything to have that.”

His words grew inside me, like a concentrated drop of dye in liquid–spreading, changing me, altering my perspective, coloring everything I saw.

I drove away and part of my soul remained with that guy. I’m being totally serious here–it felt like I was leaving behind a soul mate. In the back of my mind, this nagging voice kept shouting to me to go back and…

And I don’t know. Go back and do what? Join him? Become his Facebook friend? Donate my kids to him?

Nah. I still don’t know what opportunity I’d be missing.

The rationale me won and I never did go back.

But I changed. Just a little for now. Maybe a lot as that dye continues to color my soul. As I keep thinking about that guy and how I had everything he ever wanted and how he had everything I wanted.

Even solitude. Even quiet adventure, by myself, alone in the winderness without the whining, the fighting…

The laughing. The expressions of love.

I’m working on it. But I’m a little better today than I was yesterday. And I was a little better yesterday than the day before. Maybe in the afterlife we’ll meet, and I’ll plot on a graph the change in my heart, reverse the pattern and realize that that one meeting changed everything.

So, stranger. Thank you. I’m not sure the difference you’ll make for me in eternity, but I suspect it won’t be small.

Good day to you and I hope you find what you’re looking for.

2 thoughts on “Thou shalt not covet. Right?”