(This post is part 2 of my son’s battle with meningitis). 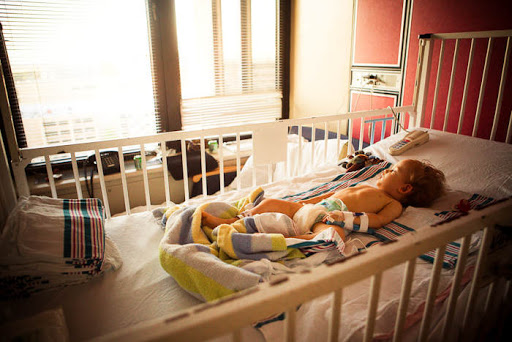 Hour after hour, day after day, I smiled at Ethan, I tried to tickle him. I blew bubbles and played with puppets. All the while I pleaded–

“Please come back to me, buddy. Just one smile? Can you laugh?”

Was he even there anymore? Or had I lost Ethan forever?

As I paced the hospital room, I remembered something critical. A year before, shortly after Ethan’s birth, as is customary in my faith, I stood before my congregation and pronounced a blessing upon him:

…You will have a special relationship with your older brother…

It seemed odd at the time. But not now. That could be it–the key to bringing him back. His older three-year-old brother, Corban. 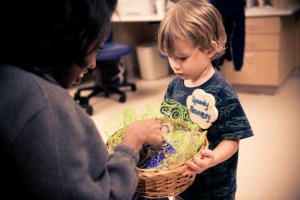 She flinched in surprise. “Corban?”

She shook her head. “It’s risky. If it’s contagious…”

I hesitated. Having one child this sick was enough. But if Corban contracted it too…

I opened my laptop and dialed Amber, saying a silent prayer. Corban’s face appeared on my screen.

“Is that your brother?”

His eyes focused on Corban. This could be it.

“Corban, look!” I said. I grabbed a toy car and drove it down Ethan’s chest, crashing into the camera. Corban laughed.

“Bring him here,” I said to Amber.

An hour later, Amber knocked at the door. “Are you ready?”

I lay Ethan beside me and climbed out of the bed.

I tapped his cheek. His eyes flickered and focused on me.

“You ready buddy? Somebody’s here to see you.” I turned toward the door. “Come in.”

Come on. Come on.

Corban entered. “Baby!” He ran toward his little brother.

Corban jumped into the bed and wrapped his little brother in a bear hug, nearly pulling out the kid’s IV. Ethan returned the gesture, grinning. 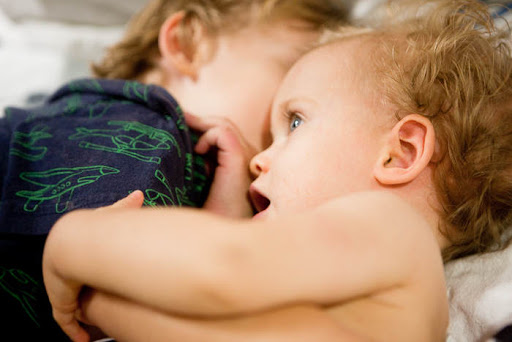 My eyes moistened. Thank you God.

For the next several days, the saintly nurses spent 30 minutes disinfecting each and every toy in the playroom down the hall so Ethan and Corban could play together. Then, as soon as we left, they’d do it all over again for the kids that would come later that day. Day after day after day.

With Corban to guide his little brother toward health, Ethan progressed. Bits and pieces of his personality returned. But I was left to wonder whether he’d return broken.

Perhaps what terrified me most was the seizures. Or at least they looked like seizures. His eyes rolled in the back of his head, he blinked like he was fighting a sudden ice-cream headache, then returned to normal.

They performed an EEG… 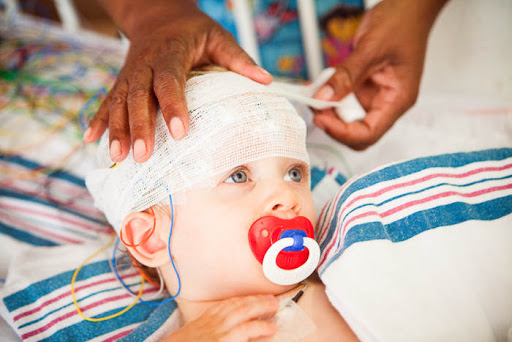 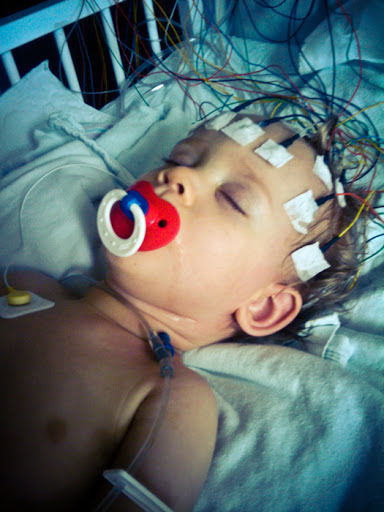 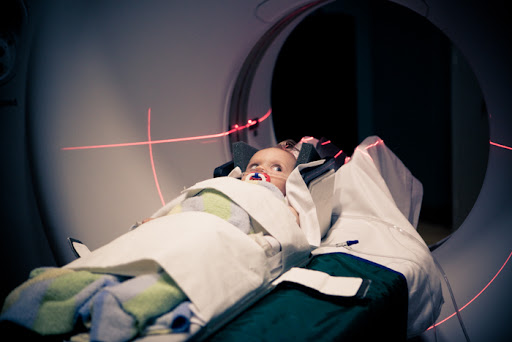 As we waited for test results, they had the pediatric neurologist visit with Ethan.

Okay. So, I didn’t like the guy. He swaggered in, wearing thick spicy cologne (I think it was Arrogance by Calvin Cline). His shoes clicked against the floor like high heels and had enough shine to blind at midnight. He sat on the only chair in the room while his acolytes surrounded him, sporting white coats and clipboards. He crossed his legs and leaned back in the chair, clicking his pen.

I tightened my jaw. “So you’re telling me nothing is abnormal about my son rolling his eyes in the back of his head and blinking like he has a headache.”

He shrugged. “It’s nothing.”

Yeah. Thanks for nothing, punk face.

Again, I went for a jog. I had to clear my mind. I had to escape from undiagnosed illnesses and mystic symptoms. I had to find time to pray alone without distractions.

But even then, I felt that God had abandoned me.

Why? Why when I needed him, did he refuse to listen? Why did my prayers remain unanswered?

I returned to the hospital, sweating and in turmoil. I climbed the stairs, turned the corner and almost ran into Amber.

“There you are,” she said. Something was wrong, I could tell from her expression.

My heart raced. I braced for an impact.

Nothing. It was worse than something. I saw something happening. That blinking eye-rolling thing was not normal.

And yet the tests said everything was normal.

Well, those same tests said that Ethan was fine a week ago. And he definitely wasn’t fine. 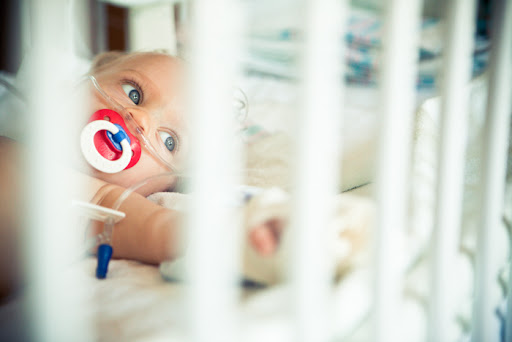 I raked my fingers through my hair.

I knew what I wanted. I wanted a diagnosis. I wanted to know what was wrong with my kid. I wanted to figure this thing out so we could treat it and so my baby boy could come back to me.

But I knew that wasn’t going to happen. At least, not anytime soon.

Instead, I did the cowardly thing. I looked to escape.

On the floor below Ethan, the hospital provided a couple rooms for the families of those who were sick. Corban slept in a separate bed alone, while Grandma rested in another across the room. I crept into the room and gently moved him to the other side.

But before I lay down, I got on my knees and prayed.

But why bother? In the last week, I’d silently shouted so many prayers to heaven with little to show for it. A cloud of darkness surrounded me, one that could not be penetrated.

Where was God? Why didn’t He at least give me peace?

And then I knew. I was too busy telling God what to do–heal my son. Bring him back to me. I don’t care what Your plans are, I want my son back.

But maybe that wasn’t part of His plan.

The thought terrified me. And yet, I knew my answer. God wouldn’t listen until I was ready to listen.

For the first time in a week, I said a prayer that reached the heavens–I leave it in Your hands. If You must take my Son…

The clouds parted. My chest warmed and peace circulated through my veins. This was right—soooooo right. This was where God needed me to be.

But did I mean it?

Contemplative, I climbed into bed and pulled the covers over my chest. This could mean the end, couldn’t it? I may lose him. I’m willing. Or maybe I’m not. How would I survive? If I felt like this, maybe I could.

But how could I?

As I lay sleepless, my resolve weakened. The clouds began to return. The peace I felt darkened. It was happening all over again.

A hand touched my back. Corban’s hand. Like a Father to a struggling child, he patted my back, over and over.

The action seemed too mature to be coming from a three-year-old. Unless, One of Eternal age directed that hand.

The peace returned and I drifted into sleep.

After that experience, there were many ups and several more downs. 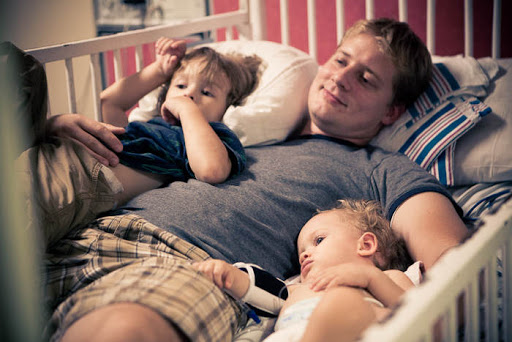 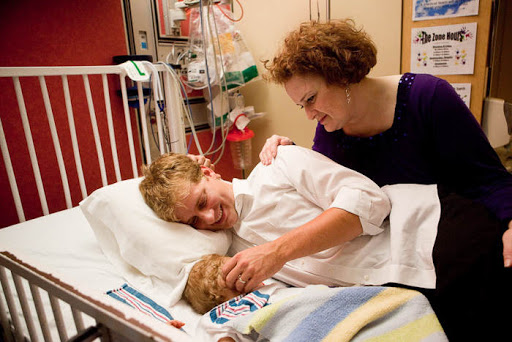 He remained at the hospital for a few more days and his “seizures” continued for several months. He had to relearn how to crawl and walk. Yet, there’s been no permanent damage to my boy.

In fact, he’s rebounded quite nicely. 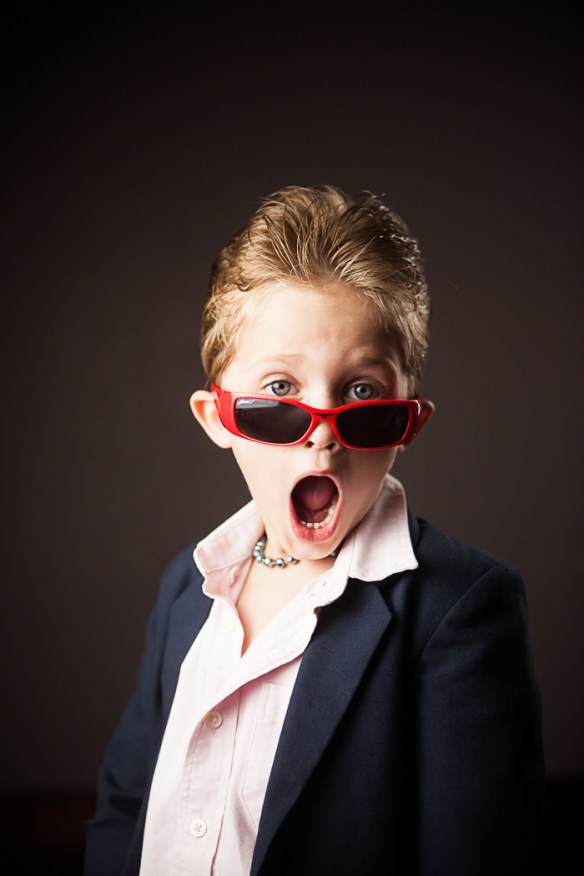 What was the diagnosis? I don’t know. Nothing was conclusive except this: It was hell. It was heaven. It was everything in between. As promised by God, I miss those days where I spent hours with my son resting in my arms. But at least there’s one thing that will not change–the lesson I learned: peace will come when we submit to His will.