Cole, a reader, said something in a comment last week that reminded me of a story I’d heard years ago–a story of persistence.

But I’ll get to that later–the “why” of this story. First, let me start with the who.

I called Ron Gillum and asked if I could share a story he once told in church.

“I’m just going to come and ask some questions,” I said, “and take some pictures. How’s that sound?”

I laughed. “So I’ll see you Saturday?”

See, the man’s an MD specialist in Pathology. I don’t know why, but I expected him to dress in a suit coat or a doctor’s jacket or something.

When I arrived, the guy was wearing a Hawaiian shirt. 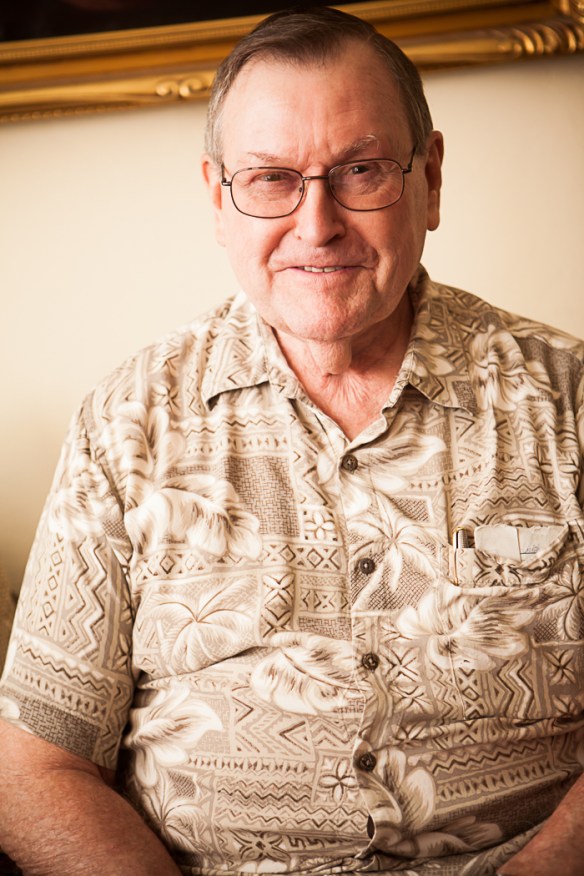 This was a guy I could work with. I settled into an antique rocking chair and listened.

But he didn’t tell just one story. The man’s a well of experiences, always anxious to share something unique.

I bent forward, my ears seeming to lift like a dog’s, sensing a punch-line.

“Within a month, a cow stepped on his foot and a horse bit off his thumb.”

I stifled a laugh.

“So the doctor, taking what little remained of his foot, amputated his big toe and sutured it where his thumb used to be.”

I couldn’t hold it back. “So he’s got a big toe for a thumb? Sorry. I shouldn’t laugh.” (Especially since I’ve had my own experience chopping off a thumb.)

He bent forward, grinning. “I did, and I was talking to the guy who had it happen!”

He leaned back and studied a painting behind me. It was of a lamb with a lion.

A threat to a threat 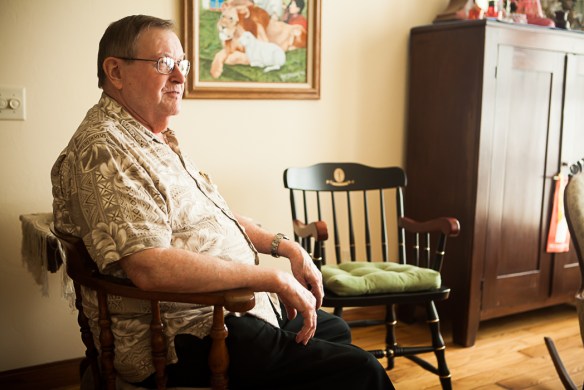 And it is a shame–when one uses their power to debilitate others.

Some become angry. Some sad or hopeless.

And others do something about it.

When Dr. Gillum was the director of Hospital Laboratories at OU medical, he finished a meeting late one night and found a large male looming over his administrative assistant–an attractive woman in her early twenties. The man had backed her into a corner, smelling of body odor and lecherous intentions.

She was alone, scared no doubt.

Until Dr. Gillum arrived. “Helen,” he said to her, “Is this your husband?”

“You’ve been warned,” he said.

Dr. Gillum left the room and called security. When he came back, the man had disappeared. Without even collecting his paycheck, he’d fled back home to Alabama.

And thank God for Dr. Gillum.

But again, that’s not the story I came to collect. It was another one–one that I remembered when I read Cole’s comment in my post on the passive bully.

…it would have been wonderful had someone extended kindness to me, but I never trusted a friendly hand even when it was extended. I always expected that if I let someone be nice to me they’d turn around and hurt me worse for it…Don’t give up. If you’re going to extend that kind hand you’re going to have to be patient. Like an abused animal it will take time to trust again. Don’t give up if you’re buffeted away at first. You could be saving a life.

I wonder if Dr. Gillum saved a life. 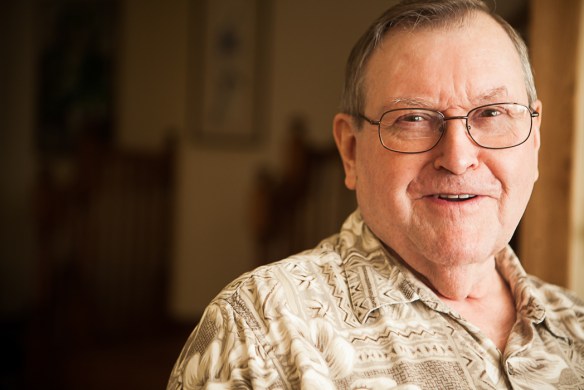 A Story of Persistence

Dr. Gillum managed the lab for children’s, university, and the VA hospital. Frequently, he traversed the skybridge between university and VA. Sunlight filtered through the glass windows, illuminating the blue and green carpet. Doctors conversed with med-school students, who wore stethoscopes and blue uniforms. 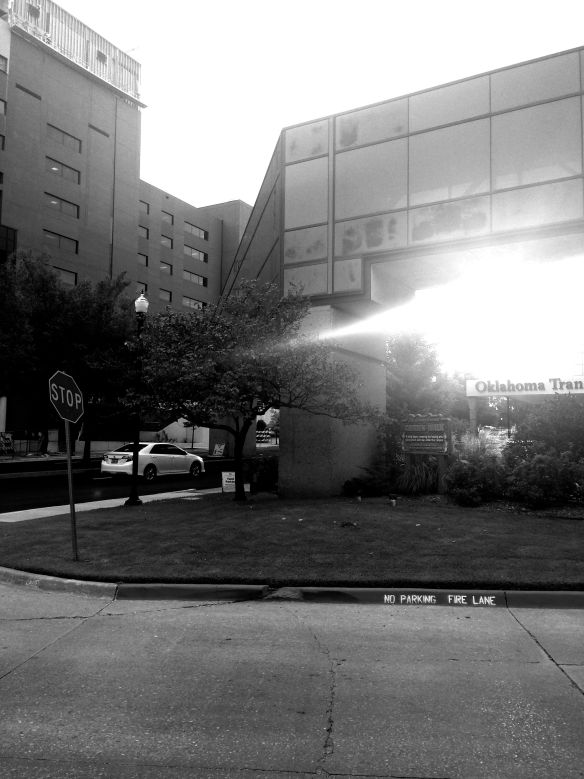 One day he noticed a girl–blond hair, blue eyes, petite, short, and probably in her early twenties. She studied the floor, head down. When someone passed on her left, she’d shift to the right, nearly pressing herself against the glass skybridge.

And so this went on for several weeks. He’d approach her, she’d lift her eyes for a moment, then immediately move to the opposite side of the bridge.

She never spoke to anybody. Never looked at anyone. Always distant.

It was ridiculous, really. The girl was lovely. Why was she afraid?

Well, he’d have to change that.

Her name was Emily, or at least that’s what her VA name badge said.

Emily. He had something to work with.

One day, he spotted her at the end of the bridge, hunched over and studying the floor. He lifted his chest, grinned widely and approached.

“Hi Emily!” he said with a wide wave. 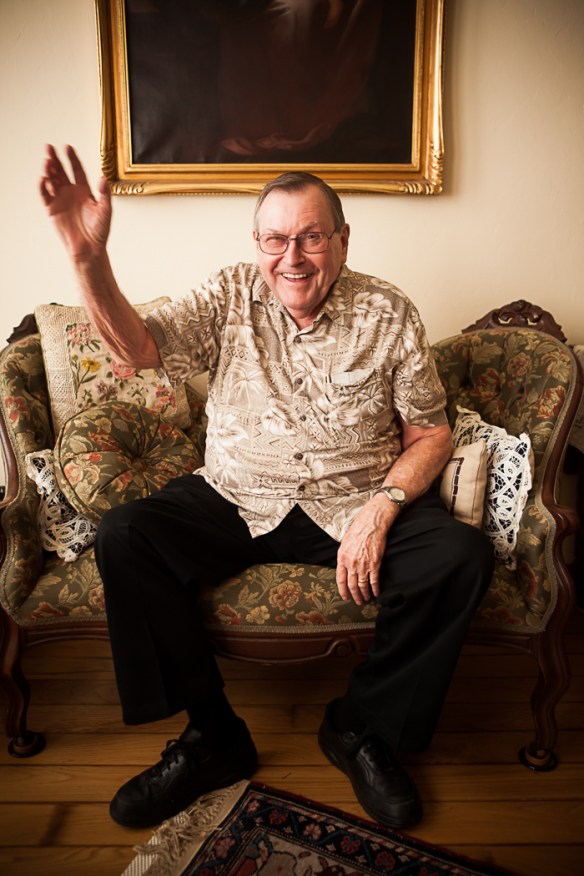 Her breath caught. She lifted her eyes, but immediately retracted them, distancing herself more.

A couple more days passed. Again, Dr. Gillum saw her on the skybridge.

Nothing. If anything, she stooped deeper into herself, distancing herself even more.

But Dr. Gillum wouldn’t give up.

I paused his story. “Did you ever think about giving up? It must have been discouraging.”

“Nope. Never. See, it was a game to me. I kept thinking, ‘Alright, Emily. I can last as long as you can. I can do this all day and all my life. I’m not quitting until I die or retire.'”

He bent forward. “I was going to get that girl to speak.”

And so days turned into weeks. Weeks into months.

Sometimes his unrequited greeting had an audience of doctors, dentists, medical students, and patients.

No matter. He’d get that girl to smile.

“But,” he bent forward, grinning. “This went on for over a year. But one day, it was just her and me in that skybridge. Nobody else. I approached, ‘Good morning, Emily! How are you today?'”

She lifted her eyes and smiled. “I’m fine, Dr. Gillum. How are you?”

I watched Dr. Gillum lean back in his chair, grinning like a kid who’s won his first baseball game. “She spoke. She said hi.”

“Did she always greet you after that?”

“No,” he said. “Not always. But I did sometimes see her talking to other people, so I must have done something.”

I think he did. I hope he did. Wherever Emily is, I’m betting she remembers Dr. Gillum, with his wide grin, his contagious greetings, and his effusive optimism.

I know I’ll always remember that.

I find it interesting. Here was a man who was a doctor with various awards, accomplishments, and letters to his name. Yet when I asked him to share his story, he told me none of that.

He told me about a severed thumb, a foiled assault, and a greeting over a year in the making.

It kinda makes you wonder what living life is really about, doesn’t it?

23 thoughts on “Facing rejection with a smile: a story of persistence”