We should have gone to the swimming pool, where the water is clear. Instead we went to Lake Thunderbird.

That was my first mistake.

I was loading the kiddos into the truck. My wife, infant in arms, called out the door, “Don’t forget to bring life jackets.”

I looked for maybe three minutes. I was in a big hurry. I found one, but not the three I needed. It’ll be fine. The youngest, the two-year-old had a jacket. The other two had been taking swim lessons. They knew, at least, how to doggie paddle.

We drove in my Toyota pickup. For nine miles down Alameda, my truck door, no longer able to close completely, thudded and crashed against the hitch, like a shotgun shell. The kids remained uncharacteristically silent.

It had been years since I’d been to the lake. I couldn’t remember where to find the clay beach I’d been to before. So I stopped at the first park I saw. The place was empty except for a beer-drinking fisherman and a tire swing that creaked ominously in the wind. Creeeeek. Creeeeek.

The rain has dropped like waterfalls this spring, day after day. I didn’t realize how bad it had been until I saw the line of trees half-submerged in water.

We exited the truck and walked toward the water forest, side-stepping beer cans, dirty diapers, and cigarette butts.

“You guys ready?” I asked, attempting to hide my apprehension.

“Yeah!” They bolted to the lake.

I entered. Though the water was warm, hot even, I shivered. It was brown and murky. I couldn’t see more than an inch beneath. But the worst part was the grass. The water had flooded into the grass. The clumps of turf felt like scorpions beneath my feet. I moved gingerly, certain something would attack.

I had to get out of there.

“Hey boys…let’s go to another beach.”

I loaded the kids and drove aimlessly, looking for that clay beach. We finally arrived.

It too had become water-logged. The water had come nearly to the parking lot. A grill was entirely submerged. People tripped on exposed tree roots as they waded through the water.

But at least there were people here. 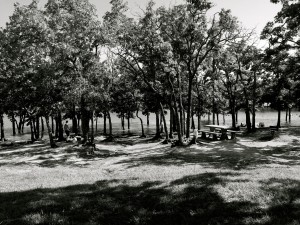 The red clay turned the water crimson. Music blared from a boombox–country, rap, and rock (quite an eclectic mix).

I sat at the water’s edge, forming clay into mudballs and throwing them at the trees. The older two dunked their heads under water, fighting for my attention. Kelson, the youngest wandered, picking up a rock here, a chunk of tree bark there.

He points past the line of trees.

I picked up the youngest. The other two climbed on my shoulders and I started walking.

I crouched lower. They laughed.

I crouched again. They laughed again.

I hit a drop-off. I lost my footing. My head went under water. It was too deep to touch.

Primal panic kicked in. I kicked toward the surface. My head emerged. My boys, my boys. My instincts betrayed me. I clung to Kelson. I was trying to save him but I was dragging him under. He screamed.

But not the others.

Oh God no. Where were they?

A hand emerged above water, clawing at the surface.

But where was Ethan?

My traitorous instincts released their grip on my rational thoughts. I let go of Kelson and groped under the water, searching for Ethan. My fingers brushed rib bones and a spine. I grabbed Ethan and launched him toward the shallow water.

Thank God. All three of my boys screamed.

It was music to my ears. They were alive.

I steadied my voice, trying not to let my own tremble announce my pretense.

I almost drown my kids.

I wanted to go home.

I forced a smile. I wouldn’t let my kids drown. But nor would I let them be afraid.

I shook my head. “We’re not going home until you’re not afraid. Okay?”

He nodded his head.

Within five minutes, the incident was nearly forgotten and when the time arrived, they were reluctant to go home.

I wasn’t reluctant. Not at all.

But I wouldn’t let my kids know that. I suppose it was something I learned from my own dad. Whenever he confronted situations that terrified me, he was always cool, always relaxed, always full of faith. 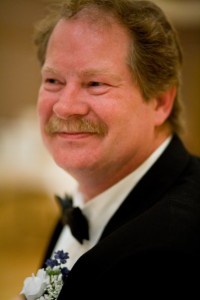 But perhaps, like me, he was just pretending–faking it to ease my own fears.

Sometimes dads have to pretend to be strong so that, one day, their children don’t have to fake it.